Thanks to increased visibility due to link love from some buddy sites I have been enjoying some of the spam comments which are attempted to be posted on the blog.  The lack of basic grammar and... well... English makes for humorous reading.

I'll have to start sharing the ones that make me laugh the hardest.
Posted by Tots at 1:58 PM No comments: Links to this post

Posted by Tots at 6:44 AM No comments: Links to this post

It's not unusual on the web for other people to use images and stories created by other people.  Common courtesy calls for a link back to the original author or creator or at least some recognition.  It is normal for people who create images to put a logo on the image itself so if a picture goes viral the original creator will get credit.  This is important because in the event credit or a link back is not given, the author can still reap the rewards of the image's popularity with traffic to their website (and by extension the financial rewards from the additional traffic).

Those of us who aren't "Established" don't make much in the way of cash.  An image going viral could provide a decent surprise check which can help cover the bills for our passion for a bit.  Needless to say, it gets annoying when someone not only doesn't link back, but takes the time to strip the logo from a created work.

Take for instance one of my favorite IAMFAIL strips I've made: 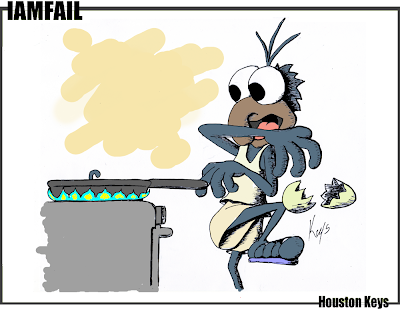 Yeah, nothing special to it, I'm using Gonzo in a parody form and I thought the idea of him finding out he was a father while making breakfast (due to his relationship with his girlfriend Camilla) both dark and funny.  I liked it, so I decided to post it.  Please note the IAMFAIL logo and my name.  I don't mind people sharing it because a quick google search on IAMFAIL with my name will point them to my deranged corner of the web.
Now, if someone scrubbed my logo, my name, and possibly even my signature and posted this picture on their site, it went viral and they got lots of traffic because of it, that would not only be my opinion of theft, it would piss me off.
A guy I consider a buddy is BigFurHat over at iOwnTheWorld.com and he recently went through a very similar situation.  He posted a photo at his site a little while back poking Obama in the eye over his handling of the Government Shutdown (tm).  He made this little dandy: 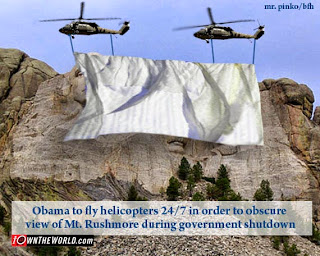 Note the iOwnTheWorld logo in the lower left corner?  Another site called Free Patriot found the image and modified it: 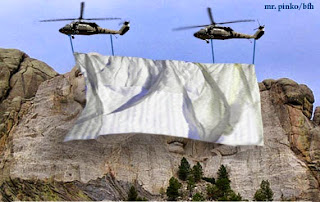 Notice anything different?  Yep, Fur's logo is gone.  There is still the credit for "mr. pinko.bfh" in the upper right corner, but that's much less noticeable that the original red, white and black in the original.
Note:  The modified image on the original post is viewable using the Internet Archive.
Fur complained to the individual running the site and was told it was a mistake by an editor and to his credit, restored the original image (although he was pretty dickish about doing it).  Fur continued to press the point based on the fact that the genie was out of the bottle.  The article had already been shared on Facebook over 87,000 times by the time of the correction.
What does Fur get because he complained?  They removes Fur's original image and replace it with an out and out THEFT of his idea by placing this image on their page: 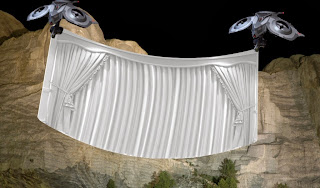 http://freepatriot.org/2013/10/05/spiteful-obama-blocks-view-mt-rushmore/
Yeah, new Rushmore, drones instead of helicopters, new curtain.  Yeah, how about a wise-cracking bunny rabbit who eats carrots celery and gets chased by a hunter with a shotgun crossbow for a cartoon idea?
Fur's prediction?  Sure enough, this popped up on Snopes: 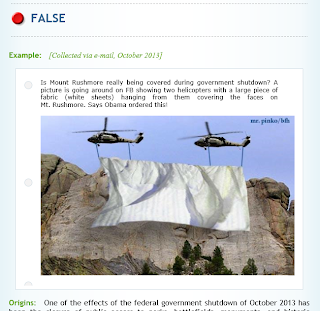 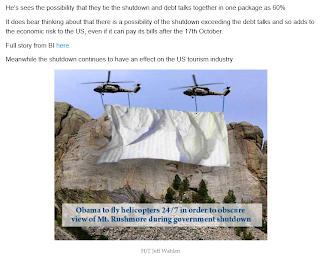 http://www.forexlive.com/blog/2013/10/04/us-government-shutdown-could-continue-after-debt-ceiling-hike/
Even worse, FOREXLIVE doesn't even PRETEND to leave any accreditation, they Photoshop out both the logo as well as the "mr. pinko/bfh".
Fur chronicled the exchanges with Free Patriot on this post if you'd like the whole story.  Long story short, he got screwed several times.
So why am I griping?  Fur shared a video I had put on my blog, has linked to a couple of stories I've blogged about or shared and has even let me put up a guest post over at iOwnTheWorld.  I did the happy dance when this little hole in the wall made the blogroll over there.
In short, he's good people and plays straight.  Seeing him get screwed makes me angry.  It isn't the first time, nor will it be the last for him.  Of course don't feel bad for Fur alone, FrankJ at IMAO.us got the same deal on this picture he made making fun of Obama and the 3AM call: 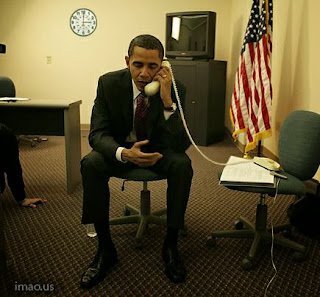 Go do a google search for Obama upside down phone and look how may variations you get.  It also landed on Snopes, but at least FrankJ finally got acknowledged for making the parody image. 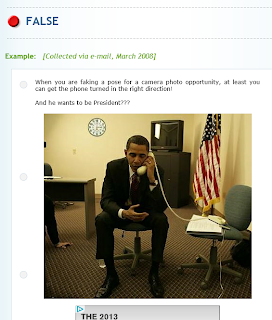 http://www.snopes.com/politics/obama/phone.asp
Personally Free Patriot is dead to me now and so is FOREXLIVE.  I'm sure they'll be crushed by me never clicking on their links again, but one small step...
(You guys know I didn't come up with the "One small step..." thing right?  That was Neil Armstrong for the record.)﻿
﻿
Posted by Tots at 9:12 PM No comments: Links to this post