Gonzo Finds Out He Is A Father

If I Were The Devil (Paul Harvey)


H/T to IOwnTheWorld.com not Fox News.
Posted by Tots at 12:22 AM 2 comments: Links to this post

OK, sorry about all the delays with the postings.  I already have my idea for Thursday and plan on posting it so Thursday morning you can see it, rather than staying up until midnight for the joy.

Of course, if you are dedicated fans you will be anxiously awaiting it...

Nevermind.  Thanks for coming by.  In real life I am torturing my children by loading Windows 8 on our machine and making them use it without any instruction.  So far they have been hitting the stuff no problems so it seems pretty intuitive to them.  We'll see what the market says.

See you Thursday.
Posted by Tots at 9:48 PM No comments: Links to this post 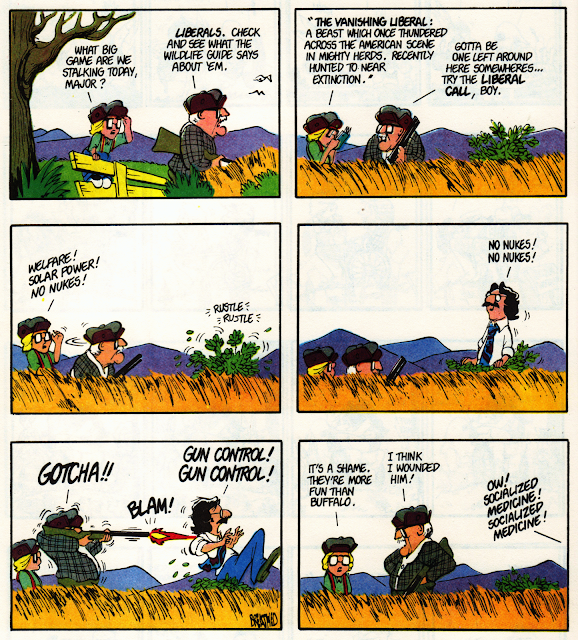 I have to apologize for not making the IAMFAIL post for last Thursday.  Too much work and family demands.  So to make up for it, I present a page from the master, Mr. Berkeley Breathed's Bloom County.

Bloom County was a wonderful mix of wit and social commentary that provided years of laughter and memories for my friends and me. This one made me laugh again with the current state of America.  Some of my buddies online dream of us going hunting like this.

Plus, for years I always had a stuffed Opus on my amp when my band took to the stage.  I still would, but my kids "Adopted" him when I grew older.

Have a great weekend, and I'll see you all next week.

The Most Fertile Man In The World

Slutgate: I Own The Word

I found this article while while parusing teh interwebz over at one of my favorite haunts, I Own the World.  Seeing as how Mr. Schultz called one of my favorite radio hosts Laurah Ingraham a slut on his show a while back, I agree turnabout is fair play.

*In full disclosure, it is my opinion that since Ed only has about 32 viewers of his TV show and 23 listeners on radio, it's not like he really had the impact Rush Limbaugh did.  Please don't tell Ed's mom though, she thinks he has a respectable job selling kidneys from Chinese dissendents who die in labor camps.*

Atlas -
A 30-year-old poses as a 23-year-old, chooses a Catholic University to attend at $65,000 per year and can not afford ALL the birth control pills she needs… so she wants the US taxpayers to pay for her rampant sexual activity. By all accounts she is banging it five times a day. She sounds more like a prostitute to me. She must have an gyno bill to choke a horse (pun intended). Slut was a softball.

Obama calls her and tells Sandra Slut Fluke that her parents should be so proud of her.
He’s a pimp.
Did he call the sole survivor of the Fogel family massacre?
He is morally bankrupt.

As for Rush calling a spade a spade, or in this case, a slut a slut, advertiser Carbonite is playing selective outrage. Contact Carbonite here and demand that they drop their ads from Ed Schultz’s program.

Is This Why Carbonite Dumped Rush But Not Ed Schultz?

More Here
Posted by Tots at 10:25 PM No comments: Links to this post

Games Geeks Play With Our Pets

Posted by Tots at 9:30 PM No comments: Links to this post