When I was in tech support I would often write and complain about technicians who would call in not having read the documentation, gone to site, troubleshot the problem and/or complained when we asked for information or made suggestions on what to try.

Now I am a lab rat, I deal directly with the field much less than I did in the past. Now I am dealing with the managers of the products we evaluate prior to release.

My problem currently is we had a product which we "Red Flagged" and sent back to development because, well, it sucked. It was coded poorly, full of bugs, flaky operation, poor documentation, grammatical and spelling mistakes etc. The developer swallowed their pride, took it back and fixed it. I am happy to say going through the retesting, it now appears to be ready to be evaluated.

This brings me to where I am now and my problem. We are RETESTING the things we found wrong to begin with. Not continuing the evaluation, not opening new bug reports, just RETESTING the existing bugs. The manager has one little thing he has found which acts differently on his system than it does on mine and he is trying to prove I don't have something flagged I should.

Truth be told, he may be right, I don't know. My stance is, it doesn't matter as I am not testing that at this moment. I guess I should care, but it is annoying the crap out of me right now. Especially considering I will be SHOCKED (SHOCKED I TELL YOU) if we sell four units of this application.

Figure THAT profit margin verses the amount of man hours we put into testing it. Of course that is not my job, my job is just to find the bugs.
Posted by Tots at 12:05 PM No comments: Links to this post

A Haiku To The Jerk In Traffic

Hello there white truck.
You need to go very fast?
See my finger dude?
Posted by Tots at 3:52 PM No comments: Links to this post

see more Funny Graphs
Posted by Tots at 11:37 AM No comments: Links to this post

A Review Of The HTC Touch Diamond Cell Phone

So is increasing the border security due to violence on the Mexican side constitute a racist policy?

The initiative is designed to help with Mexico's accelerating war against violent drug cartels.

How about that? A real reason to make sure WE STEM THE TIDE OF ILLEGAL IMMIGRATION AND SECURE OUR BORDER!!!!

When the Canadian drug cartels start making me worry and we have to start pronouncing the word about as aBOOT, then I will push for Northern border security.
Posted by Tots at 10:43 AM No comments: Links to this post

I Made The Jump

OK, so being a tech-geek-labrat at work I am required to goof with stuff to make sure it works. The real fun part of my job is I get to TRY to break stuff. That being the case I had loaded a bunch of our software onto the BETA of Windows 7 and was testing it to make sure nothing looked bad. I am happy to say with Joe Average user using it, I had NO PROBLEMS.

I wound up having to run a test where I had to load Vista on the same box I had Windows 7 running on. Clean install from the ground up formatting the hard drive.

Sorry Microsoft. You had a good idea with Vista, but I think Windows 7 BLOWS IT OUT OF THE WATER. Smoother, faster, feels a LOT less bloated. All the good things about XP and Vista rolled in together.

So anyway with the OLDEST BOY having finally trashed the computer beyond my ability (patience-wise) to repair. (SIDE NOTE: The OLDEST BOY will deny it being his fault and throw his borthers and sisters under the bus BUT, I won't mention the program which I found that burrowed itself into XP and was trying to act as a mirror for another kind of site I won't mention. HE hasn't heard about that yet... but he will now. Also when Internet Explorer finally won't open and every has to use Firefox for everything... well, something is JUST WRONG.)

I bit the bullet, weighed the options and loaded the BETA of Windows 7 on my home PC. It's early still, but so far, THE WIFE isn't furious. I have the kids account set to remove all changes after they log off, so Ben can't trash it with the malware from game sites. We'll see.

Christopher is getting a laptop this week (maybe... apparantly the first one was destroyed in transit) and I may just load 7 on it as well.
Posted by Tots at 6:48 PM 1 comment: Links to this post

I am on Vacation this week, so I am not putting my outrage to good use. Just annoying THE WIFE and reading LOLCATS:

Well, last February 16th THE WIFE and I lost a good friend named Cali to cancer, this Marc 13th we lost another. Our friend Patricia passed away last Friday afternoon.

Today was her funeral.

I am just so discouraged. I try to think of the good times and hold on to them. With Cali we had a large group from church go up (proabably 18 people or so) and sing to her in her ICU room. Imagine big old fat me carrying my upright bass down the hall of a hospital,

We took drawings by the kids, my brother-in-law's CD, my picture of "Buckethead" to hang on the ICU walls and THE WIFE played recordings of the girls singing to Patricia. It just sucks to tell a friend how much you love her and not be able to hold her. To see her living on machines. To not be able to make it all OK.

I am very grateful that THE WIFE could get reactions from Patricia even to the last day we saw her. She would hold her hand and talk to her and even as out of it as Patrcia was, sometimes she would move her head around and squeeze THE WIFE's fingers.

I haven't played my bass very much lately. Things are just kind of... I don't know. I don't know what to say here either.

I miss you Patrcia. I look forward to seeing you and Cali on the other side. I love you both. I miss you two so much.
Posted by Tots at 10:24 PM 1 comment: Links to this post

From an email I got:


VOTER ID BILL COULD IMPACT LEGISLATION IN SENATE
The Senate is poised to debate the contentious issue of voter ID on March 10th. In a surprise move early in the session, the Senate voted along party lines to make an exception to the way they determine what bills may be heard on the floor of the Senate, identifying the voter ID bill as the only bill for which a 2/3 vote of the members of the Senate would NOT be required in order to hear the bill on the floor.  The likely outcome if the bill is passed is a decrease in the collegiality for which the Senate is known, and the possibility that the session may descend into partisan fighting over most if not all legislation for the remainder of the session.  In short this issue could negatively impact much of the proposed legislation this session. According to the current schedule the full Senate will likely vote on the issue by St. Patrick's Day. The lawmakers are expected to vote along party lines.

OK, so I am sorry if the thought of providing an ID when you vote gets some people in a twist, but when I don't know half of what is being said around me as I go through my day because of people switching to Spanish instead of English, color me skeptical. Not to mention the accounts of accusations of voter fraud nationwide in the '08 election.


I am surprised the same people don't balk at the thought of having us register in the first place.

Posted by Tots at 1:11 PM No comments: Links to this post 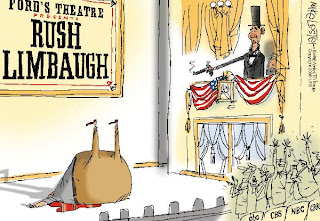 Posted by Tots at 1:00 PM No comments: Links to this post

OK, folks, I am in a quandry. I would like to make some side money, but I cannot think of a good way to do it. Preferbly I would like to do something where I can be around in the evenings with my kids and wife, but I am not having a lot of luck.

Somethings I have bounced around.

1. Creating annoying T-shirts for sale on the web. (Can do, not much start up cost, but I have nowhere near enough web traffic to make cash.)

2. Writing kids books. (Probably my best bet for the short term as I have a built in test audience.)

3. I can always work at one of the resturants down the street (but that takes away from kid time).

Any other ideas folks? Something annoying and creative?
Posted by Tots at 12:15 PM 3 comments: Links to this post

Created by OnePlusYou - Free Dating Sites
Posted by Tots at 4:02 PM No comments: Links to this post

Your Know Your Place In Life When...

A mime has more followers on Twitter than you.
Posted by Tots at 4:59 PM No comments: Links to this post

The Presidential Portrait Is Unveiled! 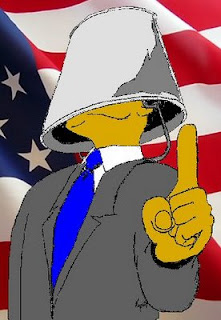 With apologies to Frank J.
Posted by Tots at 12:07 PM No comments: Links to this post

Sorry for the Delay... This whole work thing really gets in the way.

So the Evening began well enough with the Dark Lord of the Tot inspecting the PBX prior to cutover. 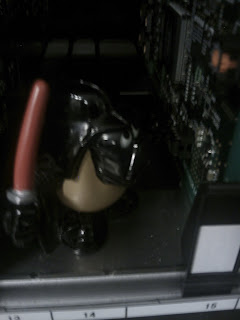 Impressive, most impressive.
The cut went amazingly well, so Darth hops on a local kid's bike to find a party to crash. 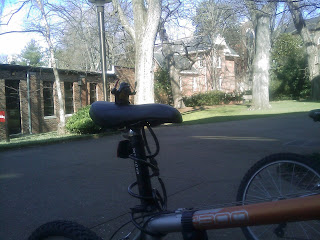 And awaaaaaay I go!
And "The Party Spot" is found! 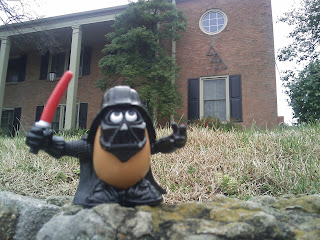 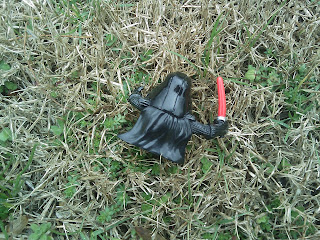 I Need a Laugh

D-Day struck at work. I am in Nashville wrapping up my MAJOR PROJECT (which went amazingly well) and I got word of the layoffs hitting. Lots of good people got whacked and unfortunately lots of people who needed to get whacked didn't.

Regardless, here is a video of John Stewart from the Daily Show blasting Obama. Thank you John for realizing ALL of our politicians are idiots.

The Daily Show With Jon StewartM - Th 11p / 10c
Clusterf#@k to the Poor House - Prime Ribbing
Daily Show Full Episodes
Important Things With Demetri Martin
Political Humor
Joke of the Day
I promise to post Darth Tater's weekend adventure when I get back to Dallas.
Posted by Tots at 11:38 PM 1 comment: Links to this post