I wish I had thought of it!

Plot Hole In "The Cat From Outer Space" 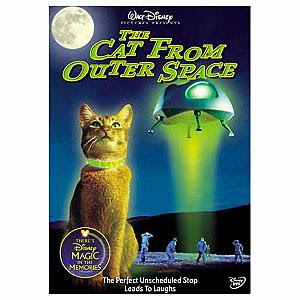 OK, so Lucie is enamored with the Disney movie "The Cat From Outer Space" where the cat "Jake" tells Frank (played by Ken Berry) that he comes from a planet where they developed their mind where humans instead developed their physical abilities (paraphrasing).

He is able to focus his mind powers because of his collar he wears, BUT he later tells Frank without his collar is just a regular cat!

So how the heck did they make the collar if they don't have thumbs and they are regular cats without them?

Merry Christmas To All

Hey All. I haven't quit blogging, I am just enjoying a little free time with my family. We had a wonderful Christmas with my Dad and Step Mom visiting, so the kids, THE WIFE and I were ecstatic.

I also get to brag that THE WIFE (being the perfect, wonderful woman that she is) got me an upright bass for Christmas. This is something I have wanted for over 15 years, so to say I am stoked is a major understatement.

Until then, love your family and hug someone (unless they are calling for tech support, then ridicule them and make them cry. heheheheehe.)
Posted by Tots at 9:45 AM 3 comments: Links to this post

Per the discussion between THE WIFE and COLLEGEGIRL, I have been very busy with preparations for the holiday season (Festivus included, "I HAVE GOT SOME BEEF TO AIR WITH YOU COLLEGEGIRL!" and I hope to practice "Feats of Strength" with THE WIFE) :-). Because of these things I have neglected my observance of Christmahannukwanzadan (my personal all-inclusive holiday).

OK, well although many interesting things are happening in my life, I have not spent the time to write about them. I am sorry (to both of my loyal readers).

Right now I am pondering a ticket from someone in our organization which is stating he is not going to troubleshoot the problem we asked him to troubleshoot, instead he wants us to open a bug report.

There is a reason the company I work for is layered in such a way that not everyone gets to open bug reports (mainly to keep the developers from being buried under a crapload of bad programming which has been deemed a "BUG" by a moron who can't program, but I digress).

Of course, I have adopted the attitude now of, well, since we work for the same company, I will treat you like any co-worker who I think is full of crap, and I will tell you so.

You're so smart, you open the report.
Posted by Tots at 12:50 PM No comments: Links to this post

OK, so we have two dogs. One is s sweet female mutt named Angel. The other is a redheaded Miniature Pincher twerp named Dozer.

Dozer is sweet, but very needy and very DUMB (actually he is very smart but PLAYS DUMB very well).

He is also cold natured so he is ALWAYS trying to burrow into blankets, cuddle up on people or get someone to put a sweater on him.
Which leads to this 80's fashion flashback. 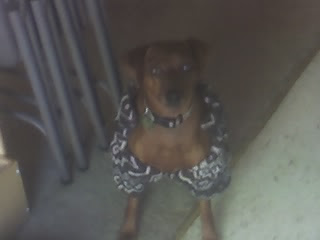 Anyone got a gold medallion to hang around his neck.
Posted by Tots at 11:37 AM 2 comments: Links to this post

I kind of keep work stuff her vague. Mainly because I don't want to offend anyone when I go off on a tear. I like to work in the background on stuff and get it fixed without anyone really knowing who I am.

Case in point the reason why.

I now have come to the attention of someone who is at one of our larger sites. Unfortunately once someone realizes you know what you are doing and will follow thorugh with stuff, they tend to latch on. That's what's going on. So now, even though this guy has a special point of contact in our department and I have my own network I am responsible for, I am running for this guy.

In the long run, it's all good as we are on the same team. In the short run, it's a lot of work for me.

Sorry folks... Terrible case of tiredhead this morning. I am drinking lots of coffee and hope to rectify it soon.

Also, I turned in my 100 Word Story this week. I was plagued with writers block and turned in a large steamer of an entry. Forrest Gump is calling Lt. Dan and singing a reworked Cher song to him.

Sorry, it was funny in my head. I got a good giggle out of Laurence's reaction. Zero votes so far, which makes it even funnier for some reason.

Oh well... Hang in the folks. Funny may eventually return.
Posted by Tots at 8:50 AM No comments: Links to this post

OK, so I see on Digg a link to a DailyKos story about a CIA torture jet which crashed with 4 TONS of cocaine onboard.

(Warning, if you follow the link be prepared for bad language. I am only posting this to show you can't believe everything you read and you need to think for yourself.)

That, my friends is a LOT of blow. I am genuinely concerned that

1.) Our government would allow the CIA to use federal property to move illegal drugs,
2.) That the CIA would be dumb enough to not put enough fuel into the jet to reach it's destination (causing it to crash, and finally
3.) That the CIA would load 1,144 pounds of cargo over the maximum payload limit of a Gulfstream II jet (reference Wikipedia which I know is not a know all end all source, but a Gulfstream II isn't a real large jet, and 5,456 pounds sounds pretty fair to me, but do your own research, that's my point).

I guess my point is, how many people are out there screaming and yelling about the things they read on the internet and never take five minutes to use the resources available to research things for themselves.
Posted by Tots at 11:52 AM 1 comment: Links to this post

OK, so this morning I am taking two of my boys to school (Chris 11 and Ben 9) when Chris pipes out in a British accent:

"Is there anything I can do to make you more comfortable as the cement sets around your feet?"

Needless to say, my kid throwing out mafia pleasantries was odd. It was especially odd to find the Mob wants you to be comfy before you get WHACKED!

What Was She Thinking?

What do cats think as you are stepping over them as you come down the stairs?

"Oh my goodness! He is going to step on me! Let me escape by RUNNING UNDER HIS FEET!!!"

Fortunately Nancy survived, although PETA may be after me because I saved her life by booting her out of the "Danger Zone."

Sometimes I wonder why I didn't grow up to be a recluse.
Posted by Tots at 2:51 PM No comments: Links to this post

Time For A Flat Tire

Just investigated the noises coming from outside and noticed our neighbor is tearing down his carport.

They are throwing all the old scraps onto a trailer which was probably backed across my driveway and through my yard to get to his carport.

The carport by the alley we have to drive down to get to the main road.

OK, so in the comments, leave a guess on the first flat tire and I'll work up some amazing prize to mail out to the winner. (If no one participates, I will be forced to club a baby seal... or something like that.)
Posted by Tots at 2:14 PM 1 comment: Links to this post

The Most Unused Page at Microsoft!

Thank you Digg for the Giggle of my morning...

Here it is, "The Most Unused Page at Microsoft." 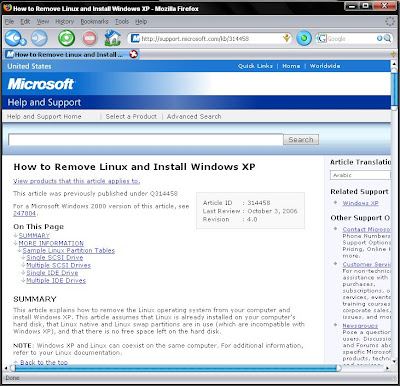 I feel better now.
Posted by Tots at 10:44 AM No comments: Links to this post

Well, I'll be working from home for a couple of days this week. My wife is watching a friends baby and Lucie is sick, so she is up here with me watching "The Little Mermaid" while I look through paperwork.

But to give you an idea of my day.

I was taking her to go potty this morning when I smacked my left shoulder into the door frame slamming the door into the bathroom wall.

I apologized to Lucie and told her, "Sometimes daddy forgets how big he is."

I Told You She Was Dangerous!

I got this IM from THE WIFE:

I told you. A DEATHDEALER she is! 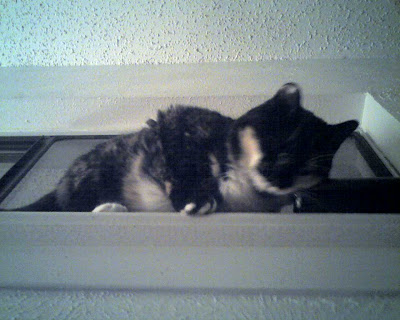 Although lecturing a cat about cranial evisceration being a bad idea is WAAAAAAYYYYY too funny.
Posted by Tots at 11:40 AM No comments: Links to this post

You know its a bad thing when you are helping a guy work on a site that is your responsibility and you do something that makes one of their nodes lose dial tone for several seconds. (At least I assume I did, it happened around the same time).

Oh well, nothing to do but grin and bear it. We didn't do anything that SHOULD have caused a problem, but hey, that is why we have what is known as "Pucker Factor."

For those of you who are not technically minded and need an explanation of "Pucker Factor," just leave a comment with your email address and I will personally email you a definition.

OK, so when you live in "Tornado Alley" you have to get used to some things. One example is when the weather is bad we have tornado sirens which go off to warn you when a tornado is on it's way.

The tornado sirens get tested on the first Wednesday of ever month. Well, my illustrious cable company is having network problems so the TV was off and THE WIFE did not have any music going when the test commenced today.

The sirens built in intensity sending my 2 year old Sadie running through the house screaming, "Momma, Momma, it's a TOMOATO!"

The things I miss by having to work for a living.
Posted by Tots at 1:18 PM No comments: Links to this post

The Texan's 7th Loss Of The Season! 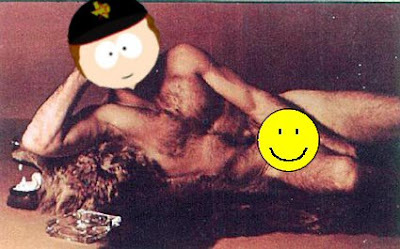 Unfortunately... I think Justin is going to pay up...
Posted by Tots at 9:42 PM 2 comments: Links to this post