Oldest boy complains about the Wife's singing. Here is the IM exchange.

Christopher will pay for his amusement when I get home. Revenge will be mine.
Posted by Tots at 9:22 AM 1 comment: Links to this post

OK, so my son Benjamen was getting him room made over by the Wife and me. When we came to discussing his bed I suggested we get rid of the bed as he never sleeps in it. Ben prefers to sleep on an old couch we left in his room as he thinks the bed is too "Soft."

Now before you freak out on me, he has sensory issues related to his Aspergers, so whatever makes him comfortable is what works for me. So the couch seemed sensible. We helped him clean and rearrange his room placing the play table his great grandfather made for him in the middle of the room. We also hung his new chair from the ceiling so he can spin and relax.

We came downstairs this morning to find Ben fast asleep... 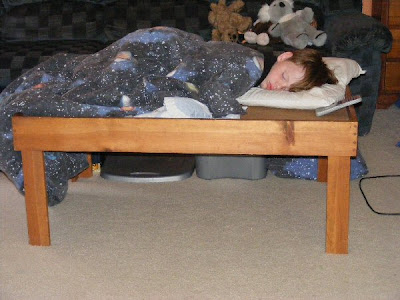 on his play table.

Posted by Tots at 11:33 AM No comments: Links to this post

So anyway. Here I am working the same call from last night.

After much poking and prodding the tech finally says "Oh yeah, we might have made a change."

Good news is my company wants me to audition to be in a promotional video shoot. My response...

Sorry, but the last thing in the world they should want is a big ugly guy like me showing my mug as the face of the company.

Besides, they spend money on everything else, why not actors to pretend to be employees.
Posted by Tots at 4:06 PM No comments: Links to this post

Another One From Our Finest

OK, so call comes in and I take it. I know the guy, nice guy not the hardest worker ever, but nice guy.

PBX reset today, he has an open ticket because this has happened before.

I look through the comments, the original engineer asked for a modem a week ago. So I ask if they got a modem hooked up and if the other engineer grabbed some trap info.

Uhhhhh... no. Hang on, I'll set one up. Let me steal one from this server

How depressing. A PBX is going in the dirt, we are called for help and you don't even do the first thing we ask you to do.

What great customer service you are providing.
Posted by Tots at 6:24 PM No comments: Links to this post

OK, to keep the tens of hits coming every week, here is my next TECH HAIKU.

I.T. calls today
My P.C. has a virus
Thanks tech from the field

Also. I AM BOUND AND DETERMINED TO PARTICIPATE IN THIS WEEKS 100 WORD STORY.

I think I can do it justice. If I can get off my rump and do it.
Posted by Tots at 5:56 PM 1 comment: Links to this post

OK, so here is another political outburst. I try to keep these rare.

So if this new plan goes into place there is a method by which illegal aliens can go back through and get Legal Alien status. It will give them an easier way into the country but there will still be limits.

What happens to the ones who can't get in?

Why they will come across the border Illegally. Work in jobs illegally and drive down the driven down wages of the legal (formerly illegal) aliens.

So we wind up right back where we started. Thank you Government.
Posted by Tots at 8:47 AM No comments: Links to this post

I am so discouraged with the Texas Rangers that I may have to start writing Haikus about them...

Wow, to think I am terrified of a series against the ASTROs.

(sigh)
Posted by Tots at 8:40 PM No comments: Links to this post

Need to Smack a Data Guy!

OK, I am very frustrated with a data guy right now.

The complaint is that our proprietary signaling is not sending a MAC address to their Cisco Switch. Despite the fact that this is a layer two function and should be sent regardless.

Our guy asks the tech to run a sniffer trace on the VLAN and send it to us. The tech responds with, he thinks that has already been done and he will talk to the IT guy when he gets in.

I still fail to understand with such a HUGE voice background as my company has, why the finger of blame seems to get pointed to us so much.
Posted by Tots at 8:09 AM No comments: Links to this post

Complaints from the Oldest

Oldest boy makes the statement last night that we "Must like the girls more than the boys as I never post pictures of the boys."

Of course the oldest boy never lets us take his picture...

I do have THIS ONE! 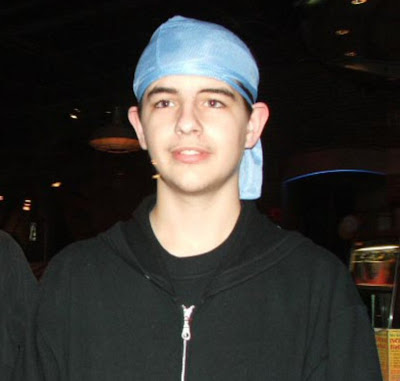 You asked for it kiddo!
Posted by Tots at 12:38 PM No comments: Links to this post

Boss is losing it.
We are afraid of him now.
Run for the door guys.
Posted by Tots at 12:37 PM No comments: Links to this post

Today is THE DAY!

The day for everyone who I didn't need to hear from following up on tickets. Fortunately for me out industrious newbie "Crash" is following up on his tickets which is resulting in a flurry of emails to me.

Thanks Crash, I will get you back.

Also I cleared one issue and now the end user is emailing me asking me questions because I was courteous in my email. Apparently, "Contact us if you have further issues," means "Feel free to email me at will, by the way here is my home phone number, call me tonight at dinner."

Not to be a gloomy Gus, but I am watching our stock steadily decline.

This is not reassuring.

Despite our pledge to double sales, I have seen nothing to actually make me think we are trying anything except waiting on the "New" line of products to come out.

Our products and services are not the problem.

How about the fact we have technicians calling into us and asking for assistance, we give it to them and then they want to hold endless conference calls instead of doing what we say because they are scared they might screw something up and get in trouble.

No guts.
Posted by Tots at 4:58 PM No comments: Links to this post

Well, one of the fun things about work is we have a resident weatherman. Not that he is a meteorologist, he just is consistently worried every time any weather event works it's way into the DFW area.

For example, if snow is predicted, he will constantly check weatherbug or The Weather Channel Online. for up to the minute forecasts. He then tells his aisle what the current weather conditions are via weather.com, CNN, WFAA, the window and whatever weather report his wife calls in to him.

Add to this he is hard of hearing as well as he is trying to tell everyone and what you wind up with is something like...

HEY GUYS! MY WIFE JUST CALLED AND IT'S STARTIN' TO SLEET DOWN IN HALT-EM CITY. I GOTTA GET HOME AFORE THE BRDIGES START TO ICE OVER. LAST THUNDERSTORM CAME THROUGH, THAT BRIDGE WARSHED OUT AND I HAD TO SLEEP IN MAH CAR FOR TWO DAYS WHILE THE FLOOD WATER RECEEDED!"

So where was I going with this... Good question, I just wanted an excuse to use the word WARSH today.

On an unrelated note if COLLEGEGIRL reads this, please remember, Mr. T (rhymes with word) will eventually grow up. Hang in there and remember there are a lot more people love you than don't.

OK, so I had a very enojoyable weekend. I got to watch my middle son's team play a great baseball game against a very good opponent. I also spent Sunday at the Ft Worth Zoo with my family COLLEGEGIRL, her Mom (Elphaba) and her dad (who I don't have a nickname for yet).

Fantastic time. As soon as I can I am going to dump pictures from it and post them, but it will only be from my kid's cameras so it should make things more entertaining.

I am just laughing about all the insane things happening here at work. Too numerous to mention and if I did too specific for me to keep any anonymity so, I'll let it go.

I will say I have one issue where we have proven Telco has a bad span (gone so far as to bring another PBX in and set it up and are getting the same thing as we did on the first one). Yet Telco and the customer continue to ask what we are finding.

Oh well. I have decided I am eating lunch today and I don't care if the world collapses. I am taking time off from the exercise wheel they have me on.
Posted by Tots at 11:56 AM No comments: Links to this post

Technically NOT On Break

So following my rules I don't blog. BUT, security is messing with badges so I can't get into either one of our labs to try further testing on my current nuclear meltdown.

So that means a Tech Haiku in honor of Security!

My badge is locked out.
I cannot do any work now.
I sit quietly.
Posted by Tots at 4:29 PM 1 comment: Links to this post

Check your maintenance.
It's older than ninety Days.
HA! You lose sucker!
Posted by Tots at 4:14 PM 1 comment: Links to this post

I have been reading 911 conspiracy stuff during my lunch break. I also ran across this link which outlines a conspiracy I never considered.

Read for yourself and see the truth.

The iceberg may not have been the only factor that caused the legendary Titanic to sink, according to a materials scientist from the National Institute of Standards and Technology who spoke at UF on Tuesday afternoon.

"It doesn't matter how cold it gets, ice doesn't cut steel," said Timothy J. Foecke, a material scientist in the metallurgy division at NIST, during a graduate seminar.

FACT: The Titanic was built with watertight compartments below decks, and was designed to remain floating after a hull rupture. The designers said, "God Himself could not sink this ship."

FACT: The Titanic hull was found in two separate pieces - cut vertically - miles apart from each other on the ocean floor. Running against an iceberg horizontally doesn't cut anything vertically.

FACT: Hours before the Titanic supposedly "sank", first class passengers were loaded into lifeboats. Some were told it was a "drill" while other crew members were saying the ship was going to sink. WHO told the crew the ship was going to sink, and why did they have this magic psychic foreknowledge before the event happened. There were no reports from any qualified shipbuilding engineers that the ship would sink.

Some of you Kool-Aid drinkers should start looking at the true facts of the sinking of the Titanic. It was nearly 100 years ago, and the so-called "experts" STILL cannot come up with the definitive and final version of why it sank.

I for one am convinced.
Posted by Tots at 11:53 AM No comments: Links to this post

I Deny All Responsibility

Because to accept responsibility would imply that I am a responsible person.

Judging by this photo, I am not.
Posted by Tots at 8:48 AM 1 comment: Links to this post