Every day I enjoy my life...

This WEEK has been like that so far.
Posted by Tots at 4:37 PM No comments: Links to this post

OK, so I am now taking enough medicine to make a Kentucky Derby winner fail a drug test. But I feel a little better this morning, co maybe this weekend won't stink horribly. I also wrote my 100 word story and will (I will, I will, I will) record it today and email it in.

In short there is the potential for today to not stink. We'll see.

The girls acted like they felt better yesterday, but Jen didn't sleep at all last night so I am watching out for her.

OK, back to the real world now.
Posted by Tots at 5:49 AM No comments: Links to this post

OK, I have been very quiet here, at METRO and other places where I may or may not blog anonymously. Sorry.

All in all, it's busy right now. Please forgive me.
Posted by Tots at 10:24 PM No comments: Links to this post

OK, I'm in again. I finally took a break from METRO long enough to throw a 100 word story together.

I like it almost as much as my Dallas 911 call.

I'll be sure to post a link tomorrow. If you are up to the challenge, it's not too late for you to submit one at podcasting.isfullofcrap.com.
Posted by Tots at 3:01 PM No comments: Links to this post

I am amazed by the sheer volume of calls we are getting on Daylight Savings Time.

Is there a patch? How do we do it? What are you doing in the future? When did your settings change?

For Pete's sake people! It's a TIME CHANGE! Relax a minute or two. I mean really.
Posted by Tots at 2:58 PM No comments: Links to this post

How does the customer do that? No one knows because the guy responsible for the Widget product has not bothered to come up with a Widget migration path.

Nice, so now the customer sits with a Widget paperweight until someone comes up with a plan.

Fortunately, that someone is NOT me.
Posted by Tots at 12:19 PM No comments: Links to this post

OK, this IS Texas right? I am used to is being around 70 now, not 27 like weatherbug shows right now.

OK, so I have been a busy busy boy over at METRO.

Unfortuantely I can't help myself, they are easy targets. Poor Deskmerc is getting in on the fun Thursday (in a way).

Bear with me. Despite the jokes and gags, I have several friends I am thinking about and praying for. Not things I can share on the web, but if you are one of my buddies, keep in mind, the Clan loves you. Hang in there.

Until then, enjoy this picture shamelessly modified and used for this post.

You can click on the picture to be taken to a full size shot which makes and attractive Desktop Wallpaper.

This is too much fun. Did I mention that?
Posted by Tots at 11:42 PM No comments: Links to this post

OK, I am so tired of finding bugs. I understand we can't possibly test every scenario and every feature with each new core release of generic software, but crap.

I have the out in the field software running a quick test and can't get Call Transfer Supplementary Services to work properly. I keep getting the transferring party's number instead of the caller's number.


Great only 9 major core load differences between what works and what doesn't.

Nice. I guess I need to start filling out the proper paperwork. Too bad this isn't the way it was reported to be broke in the field. That's another problem entirely.

I need a vacation.
Posted by Tots at 5:19 PM No comments: Links to this post

My back has been killing me all day. I had to pop a pain pill this morning at work and have been fighting the need to take one tonight. (I know WAH!)

My Obsessive Compulsive Issues are driving me nut right now because I messed up in some info I gave a tech. I feel bad about it because not only did I give him wrong information, but I was kind of short with him because I got his thing working once and he broke it again.

I'll eat some humble pie in the morning and hopefully it will be what I thought I was changing this afternoon. Then I can be done with him and back to the huge pile of stuff in my inbox.
Posted by Tots at 10:08 PM No comments: Links to this post

Work was killer today. I kind of fell like George Jetson complaining about pushing a button all day long, but wow. One thing after another when the snowball starts to roll.

I have a HUMONGEOUS project coming up starting this summer, so I have to work on it right now. Unfortunately it's being run by another department, but they are sitting on their hands so unless I jump on it, we'll be crushed when it comes time to do something.

On the good side, THE COLTS WON!

My boy MANNING and that huge melon head of his won the Superbowl. My old man (a Colts fan from Unitas and Baltimore days), couldn't be happier.

Thank you Indy.
Posted by Tots at 10:42 PM No comments: Links to this post

Red Tailights as Far as the Eye Can See

Oh, the things we get to face here in Dallas when it snows. 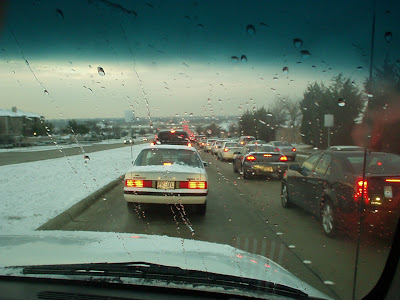 We gave up and logged in to work from home.
Posted by Tots at 10:18 AM No comments: Links to this post

There was NOTHING mentioned about THIS??? 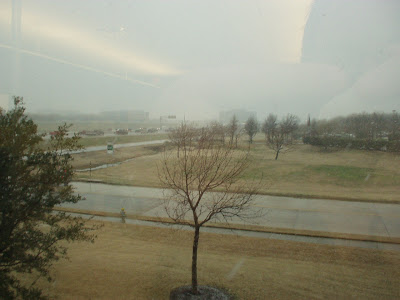 Notice the traffic backing up on the freeway.

Posted by Tots at 4:38 PM No comments: Links to this post

OK, so I am usually one to keep the Fourth Wall up pretty tight and rarely let it down. For you folks not in tech support, the Fourth Wall is the one between you and the person you are supporting.

The reason for the wall is two fold (at least), you have to be separated from the person you are supporting because the more they identify with you, the less likely they are to actually follow you instructions when you give them.

For example are you more likely to follow the instructions from your buddy on setting up your PC, or HP? You might say your buddy, but if your buddy tells you to do something you don't agree with or something you already tried, are you going to do it, or argue with him, that you've already done it.

Secondly, if you break down the fourth wall and become a buddy, then you get lots of calls from "Buddies" that need help from you. Think of how many relatives you would meet if you won the lottery and you have roughly the same number of "Buddies" in tech support.

You have something they need. If they can get if for free, well that's a plus.

Generally, if I have a "Buddy" (and I have some), they are real "Buddies".

Anyway, back to the grind. I am buried at work right now... Both good and bad.
Posted by Tots at 8:22 AM No comments: Links to this post